Rum and the sea are inseparable, and no rum is more akin to the sea and the sailor than Pusser’s Rum.

The History of Navy Rum

Pusser’s is the original Navy Rum as served on board warships of Great Britain’s Royal Navy for more than 350 years from about 1655 to 1970. It was a part of the life and times of Nelson, Pusser’s years of Liquid history has become the standard by which other dark rums are measured. Pusser’s was never sold or offered to the public unt

il 1979. Prior to this, if a rum connoisseur managed to obtain a tot or two, it was valued for a very special occasion.

From the earliest days of the Royal Navy, these foolhardy brave hearts were issued a daily ration or “tot” of rum by the ship’s “Purser,” a word the sailor’s later coined as “Pusser.”

The colour is a rich mahogany, though clear. The aroma is a burst of classic Demerara with a wonderful mix of brown sugar and molasses. Notes of leather, tobacco, dried sultanas, nutmeg, clove, and cassia. The aroma finishes with soft oak, caramel, and rich English toffee. 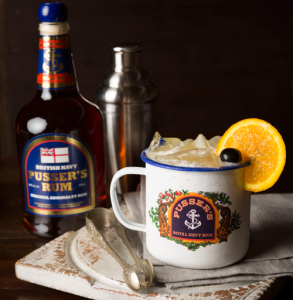 The Pusser’s Rum collection has had a bit of a revamp. While their Blue Label is still made with the exact same blend of rums – a recipe from the Admiralty – it is now bottled at 40% abv rather that 54.5% abv. The reasoning behind this, is it allows Pusser’s to be distributed to Naval bases, where the maximum allowed strength is now 40%.

It is predominantly a “pot-stilled” rum. The distillation process is similar to that used for single malt scotches, which produces greatly enhanced flavour. Served neat or on the rocks, or mixed in a cocktail, you will enjoy the full and natural flavour of Pusser’s Rum.

Join now to be the first to try Pusser’s Rum in July’s Mai Tai Cocktail Kit.