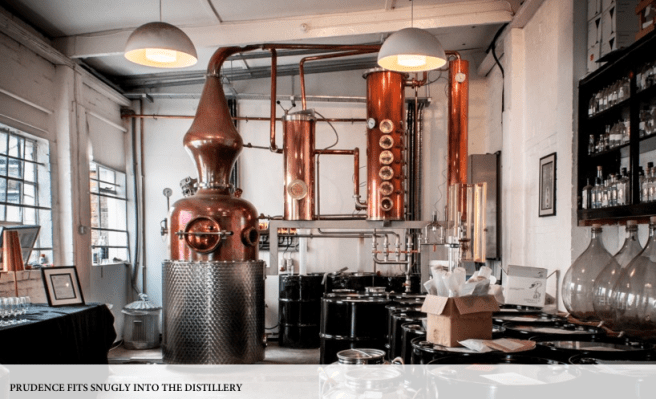 Sipsmith Distillery have just celebrated the 6th Birthday of Prudence. Who is she?

Well she’s the heart and spirit of this London artisanal operation. Prudence was the first traditional Copper Still in London for nearly 200 years, and she makes the small batches of Gin and Vodka that Sipsmith are renowned for.

Sipsmith make their spirits by hand in small batches of a few hundred bottles at a time. Their approach is quality over quantity, and they’ve merged modern technology with traditional techniques and recipes to create Gin and Vodka that are an idea base ingredient in your cocktail creations. These spirits could even entice your to start favoring very dry martinis.

Their current stable of spirits includes:

Due to their success, Sipsmith has had to add two more Stills to their distillery, and Prudence now has two sisters, Patience and Constance.

These Stills are used to make both Gins and Vodka, but when the Sipsmith team switches from one to another, the Stills are given a day’s rest in-between so that the distinctive taste of the gin isn’t imparted on their vodka.

Each bottle has a code on it, and you can enter that code from your Sipsmith bottle into the search on their website to find out what was happening in the distillery on the day your batch was born.

Prudence and her sisters are supported in the distilling process by an experienced team. The Sipsmith founders traded in their years of experience in the drinks industry to start their own company to pursue their passion for artisanal, handmade spirits in 2009.

Sam Galsworthy left Fullers, and Fairfax Hall left Diageo to join forces with Master Distiller Jared, who is, according to they’re website, a:

Over the past 12 years, Jared has developed spirits in Sweden, Norway, Vietnam and the U.S. With a pedigree like that (and a vision of him distilling Gin in his underwear), you can have the confidence that your bottle of Sipsmiths has a good start in life.

This dynamic trio are joined by a supporting cast of characters that keep Sipsmiths running as smoothly as Prudence.

The Sipsmith team like to think that buildings have souls, and the good vibes from previous inhabitants of their distillery in Hammersmith, west London are infused into their distinctive spirits.

Their location was once home to the micro-brewery from a local pub, and before that the home of esteemed whisky expert Michael Jackson (No not THE Michael Jackson!) and they’re continuing the artisanal history of this location.

The inspiration behind the Sipsmith logo is a reference to the “swan’s neck” pipe where the spirit vapor turns about Prudence. She really is the inspiration for everything to do with this London distiller.

Sipsmith have created a timeline view of the History of Gin on their website, which starts with King William of Orange dropping the tax on spirit production for the health of the nation and to utilize a surplus of grain in 1689 to when Sipsmith opened it’s doors for business in 2009.

If you’re in the neighbourhood, you can visit Sipsmith for a weekend or weeknight tour and tasting.

In the mood for a Gin Martini? Why not head over to our TASTE Cocktail Box page – and grab yourself a Gin Martini and Martinez box – we still have a few left.