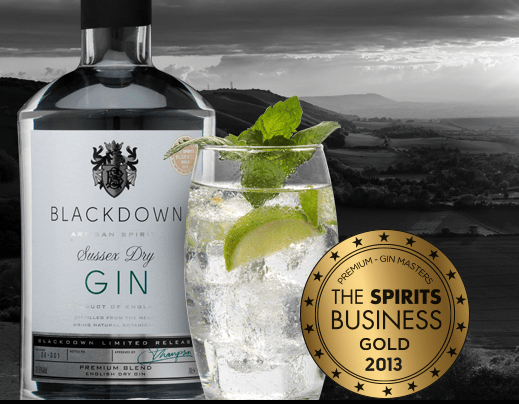 A Sussex Couple with Spirit

Blackdown Artisan Spirits is run by husband and wife team, Sarah and Nathan Thompson. It’s nestled in the foothills of Blackdown Hill in West Sussex, and not only does the local area lend its name to the distillery, it also provides an integral component of the spirits they produce…

First in the Blackdown product line was their Blackdown Sussex Dry Gin, launched in 2013 – and it was well received by the industry.

Although this is pretty recent, this couple aren’t novice distillers. Even before its release, they had already established a solid reputation as owner operators of The Lurgashall Winery.

Sarah and Nathan had actually been using gin and vodka at the winery for 40 years to make liqueurs, sloe gins and ports, so their new line marketed under the Blackdown trade name was simply another branch of the same tree.

The winery is surrounded by 40 acres of Silver Birch trees, and they use its sap to create spirits with woody aromas. It’s added during the distilling process, along with 11 other botanicals including juniper, cinnamon bark, angelica root and liquorice. Their gin has a slightly sweet taste to it because of the natural sweetness inherent in the sap.

This critical component doesn’t come easy. It takes 100 gallons of birch sap to make a single gallon of birch syrup.

Earlier this year, GQ magazine featured their Sussex Vermouth as the key ingredient in the first ever All British Martini. Blackdown is currently the only distillery to produce a vermouth here in the British Isles, so now it’s possible to create a perfect home-grown martini.

The UK’s first white Vermouth is full of flavour. It of course includes Blackdown’s distinctive Silver Birch, and merges it with wormwood, chamomile and juniper to create a smooth and refined taste with a hint of sweetness.

Blackdown also proudly support the local economy by only using British suppliers for all its ingredients and packaging. They take this artisanal spirit seriously, and strive to always stand out from the crowd.

Blackdown Artisan Spirits are distilled from the heart and produced by hand in small batches.

As well as gin and vermouth, they also produce a silver birch vodka, a Christmas pudding vodka, and an elderberry port.

Try Blackdown Sussex Dry Gin in our Aviation Kit, going out to subscribers at the start of June for just £24, or available to buy as a one-off for £29 after that.

If you like the Gin and want to stock it on your home bar, or you’re keen to try their vermouth, vodka, or port, Blackdown have kindly given TASTE customers 15% off their entire range! Use the code “Taste15” when checking out on their site.