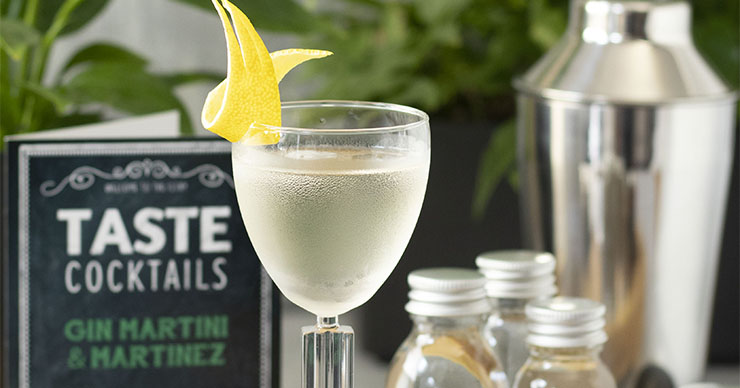 A Classic Martini in its simplest form, calls for just two ingredients – gin and vermouth – garnished with either an olive or lemon twist. The origins of this popular cocktail are unclear, but it’s said to have morphed from the Martinez and today several drinks served in V-shaped glasses have adopted the name – but are they actually true Martinis? Many of these “modern” cocktails are shaken – for example the popular Espresso and Pornstar Martinis – and 007 certainly loves his Vesper shaken as well. What is the correct way to make a Martini and is it right or wrong to shake them up?

A variation of the Classic Martini, invented by Ian Fleming for the hero of his series of novels about a fictional British Secret Service agent called 007.

With the latest Bond movie, No Time To Die, being recently released in cinemas worldwide, so many of us are reaching for our martini glasses and making our favourite versions of this classic drink.

The Vesper, named after double agent Vesper Lynd, was immortalised in fiction by Ian Fleming, the author behind the Bond dynasty and the drink appeared in “Casino Royale”, the first James Bond novel published in 1953. Although Fleming wrote the first book while he was staying at his Goldeneye Estate in Jamaica, legend has it that it was at his former watering hole, Dukes Bar in London, that he was inspired to make the Martini Bond’s drink of choice and where he coined the phrase “shaken, not stirred”.

Bond’s instructions to the bartender were “Three measures of Gordon’s, one of vodka, half a measure of Kina Lillet. Shake it very well until it’s ice-cold, then add a large thin slice of lemon peel. Got it?”

Shaken or Stirred – why is Bond wrong to shake his Martini?

Bond’s Vesper is certainly not a drink for the feint-hearted, so if you are wanting to try his recipe yourself, it’s highly recommended that you dial back the volume, but keep the proportions true.

Shaking your Martini with ice will aerate and dilute the drink and also result in ice shards which will float on the surface of the cocktail. Normally it’s best to stir your Martini with ice until really cold, but this method takes time and often bartenders don’t have this luxury, which is why they are often shaken. However, despite what the purists say, the general consensus is that Vespers should be and are allowed to be shaken! Don’t forget to express the oils from the lemon twist over the drink and rub it along the rim of the glass before dropping it into the glass for that extra citrus hit.

If you have freezer space, then you can also build your Martini in the glass, using ice-cold gin and vodka direct from the freezer, avoiding the need to stir or shake. Salvatore Calabrese, who was the Bar Manager at Dukes Hotel in London in the 1980s made popular the Direct Martini, often also referred to as a Naked or Duke’s Martini, using this method. He also invented the Breakfast Martini in 1996 when he was working in the Library Bar at the Lanesborough Hotel and this one is definitely shaken!

Do you enjoy a Martini made with Gin, Vodka or both?

In No Time To Die, Bond and Paloma are in a bar in Cuba and knock back a few martinis served in some beautiful vintage glasses. From the product placement, we know they are Smirnoff No. 21 Vodka martinis.

Although the 007 Smirnoff campaign understandably advertises a Martini without gin, so this is not a true Vesper, they do advocate shaking up this Martini! Why not give this vodka-based martini a try and see how it differs from one made with gin? Grab some vintage glasses to sip them from and be like Bond!

50ml Smirnoff No. 21 Vodka
12.5ml Dry Vermouth
Lemon Zest to garnish
Add Ice and ingredients to a shaker and shake till cold.
Strain into a martini glass and garnish with the zest of a lemon.

If you are wanting to try your hand at making a Classic Gin Martini at home, Taste Cocktails have two cocktail kits which are perfect for this. The Gin Martini Mini Cocktail Kit features Broker’s Gin and includes several variations so that you can try a few and see which is your favourite. Will it be Dry or Wet? Perhaps you prefer them Dirty!

The Discovery Gin Martini & Martinez Cocktail Kit also includes ingredients to make a Martinez, the precursor to the Martini, which was originally based on Dutch Jenever or Old Tom Gin. There are many versions of this classic cocktail which can include either Maraschino or Curacao.

The Taste Cocktail kit includes Marasquin, but if you have any Cointreau or Triple Sec on your shelf, do try both versions and see which you prefer and let us know.

You can purchase our Discovery Gin Martini and Martinez Cocktail Gift Set on our website and don’t forget to watch our How to Make A Gin Martini video.